The anthology is just like a cheap white loaf of bread, mixed, proved and baked in just under an hour. It came out of a series of workshops held just as lockdown kicked off, funded by UCL’s Culture Division bursary scheme.

The bursary scheme is supposed to fund projects that provide public engagement which also supports teaching and research.  The scheme should also support diverse public groups, including those voices who are heard less often.

The lecturer in charge of the project, Dr Ezra Horbury, also got a piece in the book (fancy that!), said trans people were often spoken over and denied self-representation in media and denied agency over their own medical narratives.

‘When it comes to legislation trans people are often footnotes over their own basic human rights.’

Ezra said there was always some fresh travesty trans and non-binary people were reeling from, and she wasn’t going to mention the unmentionable [i.e. the dropping of GRA reform].  CN Lester and Travis Alanbanza feature in the anthology, Lester was on the call but did not speak.

Many of the trans writers featured in the anthology attended the lockdown workshops.  To say they are at the beginning of their writing careers is probably the least catty thing I can say.  The blurb however enthusiastically describes them as the ‘vanguard’. 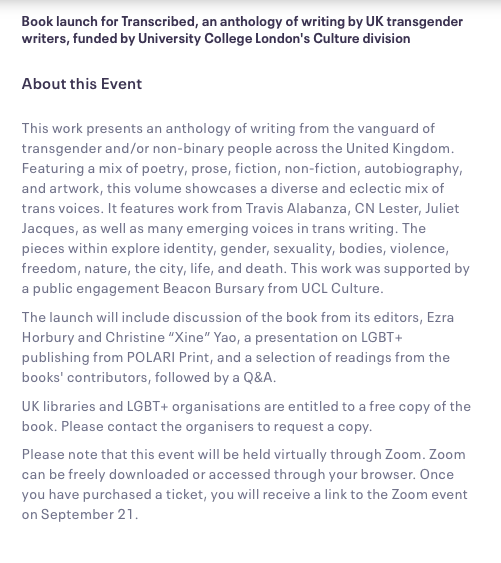 The anthology covers a wide range of genres (fiction, poetry, photography), and topics (identity, geography, internal and external spaces, geography of bodies), and was mostly a ‘celebratory’ work.  It’s a free book.  You can download it here

Polari Print are going to provide printed copies to all libraries and LGBTQ organisations on request.  Two members of Polari Print were on the call, they are a group of ‘queer’ women.  I don’t understand how they can afford to print and distribute free books, parents with deep pockets seems the most likely explanation.

Ezra told us that if we wanted to make any donations, rather than guiding the money back to UCL or Polari Print, we should donate to the Black Trans Travel Fund, based in the USA, instead.

Or to the Okra Project, another black trans project in the US, which helps pay bring “home cooked, healthy, and culturally specific meals and resources to Black Trans People wherever we can reach them” but presumably not across the Atlantic.

Dr Christine (Xine) Yao is originally from Toronto.  She read an extensive quote from the Judith Butler interview published the same week in the New Statesmen.  Yao said that Butler ‘deftly skewers all the terfy talking points’.

Of course trans people have been saying this for themselves forever, but it’s only when someone of Judith Butler’s scale, when they say it, that it receives this level of attention.’

What Yao really meant was that she had the sads because men had been told ‘no’.

Yao and Horbury were responsible for holding a day long symposium on trans lives in 2019 funded by UCL (and fully catered) – a day hugely enjoyed by myself – a personal highlight being Meg John Barker stutter through an explanation about time traveling possibilities for trans folk.

Yao said it had been a very successful day ‘despite the attempted disruption of trolls unfortunately’.

Well I was there *all* day, and the only drama was one of the speakers refusing to enter the building because of misgendering on arrival.

(Later in the chat Yao claimed the webinar had been targeted by trolls and extra measures had been undertaken to stop this.  We were sent an email telling us we must display our name or else get chucked off, but at least one person logged in anonymously so this was BS.)

The creative writing workshops were a logical extension to the symposium – it was leading towards the ‘trans futures’ that they were ‘gesturing towards’.  Yao was upset that ‘terf discourse was entering the mainstream with people like Rowling over dominating the conversation’.

Yao described the contributors to the anthology as ‘up and coming writers’ who were sitting alongside ‘established luminaries’ (mem: Travis’s greatest work yet is Burgers, a play about having a burger thrown at him, which bounced off his shoulder leaving a trail of mayonnaise).

One of the women from Polari Print spoke.  They also run reading groups and creative workshops.  Currently the virtual reading group is engaging with critical race theory and queer theory and currently reading ‘Carceral capitalism’ – another free book.

Over the course of the next 50 minutes we were treated to several slam poetry performances which I will say little about, except that they were, of course, awful.

One young woman, who appeared to have taken testosterone, and looking pale and frail, read out a disturbing poem about her transition.  This stanza particularly stuck out for me.

Roberta Francis read from his novel ‘Changing Rooms’.  He runs a trans swimming club, set up with the help of the School of Social Entrepreneurs.

Another read out an ‘edgy’ poem about strap ons from her flat in Paris.

Then a grown man read out ‘how shall i forgive you mother?’ No one, above the age of – say 14- should try to emulate ee cummings or complain about their mother.

Seriously have a look at pages 89-94 of the book.  One wonders what the rejected works were like (if indeed there were any)?  Rorschach inkblots?

At least if they had called the poem ‘Sticky Keyboard’ it could have been funny.

Then a woman, who said she was an actress and that she’d lost a lot of work due to the pandemic, read out her poem about ‘sporadic croissants’, managing to over emphasise every single word whilst swishing her head dementedly.

I was hoping for some action in the Q&A but the only question came from a man calling from Namibia who wanted to know if any of the anthology writers were trans and autistic (because he was).  Someone on the call cheerfully shared that she was and had several friends who also were.

I was left with a nagging feeling that when people look back at this time, it will be all talk about how creative trans people were.